Four Hillbillies and a Tinkerbell... 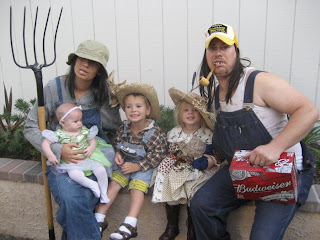 We had such a fun time this year on Halloween... we decided to carry on the tradition of all dressing alike except that I had Hal's tinker bell costume from when she was a baby and I couldn't help but put it on Skyler... So the final product was four hillbillies and a tinker bell!!! 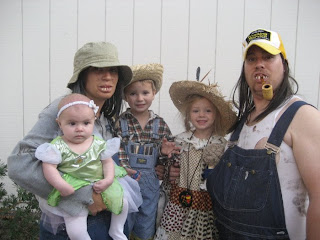 Siah had billy bob teeth but he didn't really like to wear them but both kids let us dress them up so it was fun! 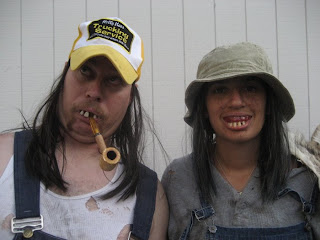 Joey looked flat out disgusting... in a good way of course :) 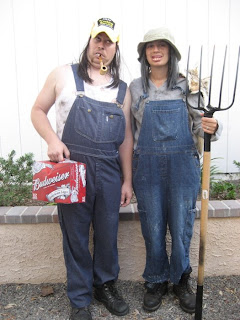 Every time I look at this picture I burst into laughter!!!!!! 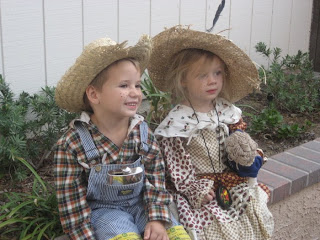 Hillbillies or not their still the cutest little rascals I think I've ever seen!!!! Joey put a flask in Josiah's front pocket. Then Joey and my dad would ask him, "What's in your pocket buddy?" Then Siah would shout, "Moon Shine!!!!!" Hal had a dolly that had a shirt on it that said, "I love Arkansas!!" She also loved her "Christmas necklace." It had a candy cane on it that lit up. (There's that country song, "Red Neck Woman," and in the song she says something about keeping her Christmas lights on her front porch all year long. So whenever I would look at Hal's necklace I would think of that song.) 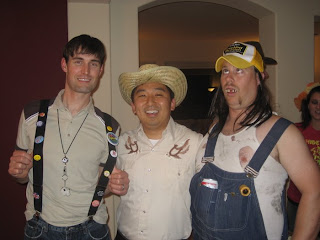 We went to a party at Jim and Monique's house... it has kinda become a tradition for us... We meet up with a few families before the party starts and take the kids trick or treating ... When Siah and Hal walked to each door, they would say, "trick or treaty" over and over but when the door would open they would both go silent. Hal tried to walk into a few people's houses. 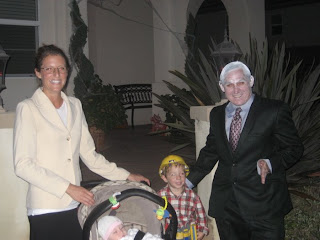 The Barons were John MCcain and Sarah Palin... Little Wyatt was bob the builder and Delaney was the cutest little sheep I have ever seen!!!! 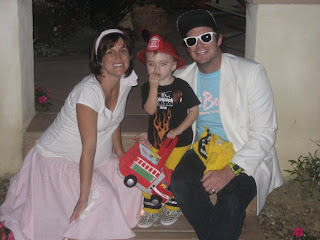 Shauna and Ryan were straight up from the 50's! And the little one... "Ryder the Firefighter!" (and Kellen was himself inside Shauna's tummy!! Can't wait to meet you in a few months little buddy!!!) 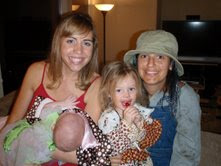 Sweet Mindy and her man, Jason, were High school sweet hearts, a cheer leader and a football player. :) Aunt Mindy took care of little Skyler most of the night it was a nice little treat for Mommy!

It really was a blast! Not Surprisingly the kids can't stop talking about trick or treating. We found one of their little friends Jackson laying on the floor in the kitchen with some starbursts in his hand. When his Mommy asked him what he was doing he put the candy in his mouth and said, "I think my tummy hurts!" Hmmm, maybe he a little to much candy :) It was hilarious!!
Anyways, Happy halloween!!!! From The Clark Clan
Posted by Clark Family at 8:05 AM