Some are beautiful.
Some are broken.
Some are simply... well... hilariously humbling. 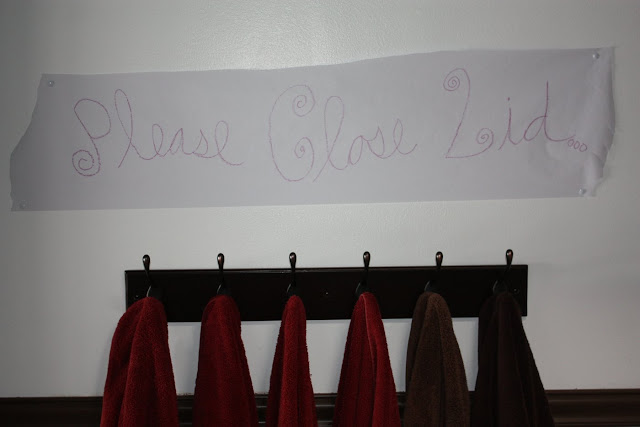 Here is one such story.

Once upon a time, six sinners saved by grace lived under one REALLY old farmhouse roof. One day when the Papa sinner was at work, the Mama sinner was reading words with two of the little sinners. This gave the  smallest sinner an opportunity to sneak into the bathroom and put two rubber duckies and a generous wad of toilet paper in the toilet.

Later that evening, the Papa sinner came home and noticed right away that his bathtub stopper was missing. The Papa loves his baths and started searching the house with a flashlight for his beloved stopper. Then it dawned on the Mama sinner that the smallest sinner just might have tossed the stopper into the toilet along with his duckies and TP.

The next morning, it was confirmed. The old farmhouse toilet would not flush and the Papa was NOT happy.

He met the Mama sinner in the kitchen and asked this Mama sinner kindly if she would purpose to put down the toilet lid every time she uses the potty... And, could she help the littlest sinners to do the same?

And this Mama sinner thought of herself, and her days, and the thousands of things that she thinks upon to keep all the little sinners fed, alive, and learning. The Mama sinner replied in bitterness,

And then it began.

"What? You won't try to put the toilet lid down?"

"No, I won't.
I have a million things to think upon in a day and I'm not gonna stress myself out about a toilet lid. I do the best I can with all these little people around here, and I hate to break it to you, but things happen, things break."

And then the Papa, dumb-founded at his wife's ridiculous behavior, turned and left for work... Irritated.

This Mama sinner stood there in the kitchen, irritated too. And as she went about her work that morning, the irritation just rose up into more irritation until she could hear herself getting all worked up about things that were not even true about here and her man.

Then it dawned on her to do the very thing that she should have done in the first place. She went to her safe-haven, shut the door, and had a few words with her Jesus. Not surprisingly, He changed her heart as they chatted and He reminded her that she always has a choice. She can bless her man, or she can burden him. It's that simple. It matters to him, so she could chose to make it matter to her.

So she got up and grabbed a large sheet of paper and a pen and made the first sign, words to help her remember to do the very thing that was important to the Papa. It said,

"Shut the darn  lid!"
(there was actually another word there, but this Mama is so bummed that she would ever even write such a word, that she can not even type it on this blog).

Clearly, the Mama sinner had not surrendered all her selfish issues. So she crumbled that sign up and threw it in the trash and started again.

This time, a life-size sign to help all the sinners under this farmhouse roof bless the Papa, and put the lid down, so that there might be less stoppers in the toilet.

The Papa was happy to see the sign and all the little ones now go out of their ways to remind each other constantly to shut the lid.

There is a lot of learning going on under this roof, and it's not just the treasures who have a bit of heart-training to go through. The sign was a good first step, but I knew what I really needed to do was make it right with my Joey. I needed to call, and humble myself, and ask forgiveness for my stubborn heart. And as always, he offers grace so freely. And when I can get to a humble place, it often times brings him to a humble place, and two humble hearts is a great place to start a new story.

The sign that now hangs in our bathroom, reminds us not only to put the lid down, but it also reminds us to let His grace cover the multitude of sin that comes out us six sinners growing up together under this farmhouse roof.


And yes, we now have a shiny new toilet. Maybe someday you'll have the privilege of using it and as you sit there you can chuckle at the thought of one silly Mama who got all bent because she didn't want to worry about putting the lid down. {weak smile}