Fruit In Time... An Update On Skyler Reese 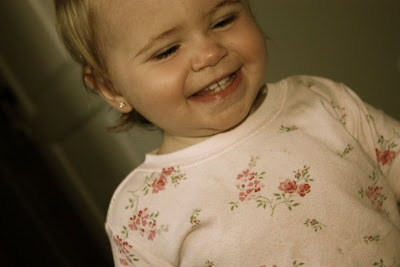 A little update on our youngest treasure…

Skyler Reese is one year old (14 months to be exact)... I LOVE this age! She is so much fun! She's walking everywhere! The poor girl has her Papa's body (which is a fine body but maybe not the most feminine of sorts), short legs and a (slight) belly, and wide, flat feet (hers are actually wide, flat, and a bit pudgy!:) She's got a full-on mullet on the back of her head, and barely any hair at all on the top of her head. But she's got redemption in her smile that will make anything bad going on in your life just melt away the instant that you see it creep across her face. She has to be one of the happiest little treasures that I have ever seen (except when we're in the car for hours on end, like we have been for the past 24 hours. :)

She doesn't have a lot of words but she says things like Mama, Papa, Yiya (Siah), Rara (Tara), and she just started saying, bye, and waving. In the past four weeks she's gotten four teeth and as of Sunday I can see four more coming in. She weighs 21 lbs and looks like a mini football player with earrings and a pink wardrobe. :)

She's full of vibrant joy! But she's a typical one year old who knows what she wants and hardly has the words to express the details of her desires. So we have started the tantrum phase with her. There are moments each and every day when we tell her no and she plops her little bum down on the ground and starts her wining routine. And when someone takes a toy from her she gets MAD! She tightens up her fists, grits her teeth together causing her whole body to shake and her face to turn bright red. And at this point in the game it seems a bit funny to me, but I know that there are deeper sin issues brewing in her little heart. Can anybody say temper? Lack of self control?

I must say that Reesie, being number three in the line up of treasures, has made things like tantrums and training in first time obedience, a whole lot easier than it was with Siah and Hal. I by NO MEANS feel as if I have mastered this age in parenting but the responsibility of it all feels so much lighter. I don’t feel at a complete loss with Reesie like I often did with the first two. I think having witnessed with the other two that fruit really does come with consistency and time, I am not constantly questioning myself about what to do with every little act of disobedience.

Of course they have all been very different in the way that they have responded to learning the rules of our home. For example, in our home, we want to train our kids to come when we call them the first time. With Siah, I had no idea how to make this happen. I would call him; he wouldn’t come; so I would just walk over, pick him up and move him to where ever it was that I wanted him to be. It’s not that he didn’t want to come, it’s that I had failed to show him what I was expecting of him when I called him. Then once I had become confident that I had showed him several times and that he understood, I had failed to hold him accountable to what I was asking of him. Once I figured those two things out, he picked up on it quite nicely.

Hal on the other hand, although I had the tools to train her correctly, she had a stubborn heart. It took time and consistency and a LOT more discipline than it took with Siah, but she also has learned to come the first time that we call her.

Reesie was the easiest… A__ because she has an easy-going personality, and B__ because I had the right tools to train her correctly the first time around.

The third time around hasn’t been a total walk in the park, but it has felt more doable, more successful, less stressful, and simply more joyful knowing that the fruit of all the time put in with our treasures always seems to come... in time.